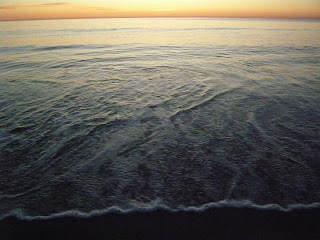 After a hectic week on the road, I looked forward to a long scheduled weekend in Maine to close up the family cabin, dismantle a decades-old left-leaning, and unused woodshed, the resulting incineration of the ruins, and a bit of Maine sanity.

I started the weekend by mowing half of a large field with a brush mower (my brother-in-law Mike had done the first half and was working on clearing a path throught the woods). Self-propelled, it dragged me through ditches and hedges, and after three hours, I felt like I had just participated in a cage fight. Still, wet with sweat, I was able to admire the Maine foliage in full gaudy, wintergreen berries - rubies in the brush, and witch hazel glowing gold. 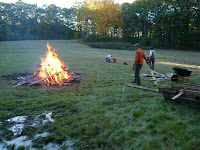 While the shed in question leaned a bit, it was sturdier than it appeared (good old-fashioned Maine carpentry). It resisted the repeated blows of Nick and Connor, but finally succumbed. The multi-generational family of mice living inside were none to happy to see their winter home dismantled, but the resulting bonfire (permit required), was spectacular in the 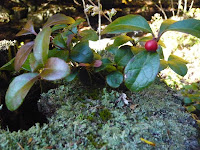 Up early the next morning (this morning), I found the oceanside to be ten degrees warmer than the cabin in the woods. There's nothing more serene than an October ocean scape, but by later in the day, the unusually warm morning drew dozens to the beach, with a few brave kids splashing in the surf. 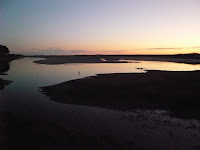 In the end, the long drive up and back did little to mitigate the travel weariness of the week, or the background worry about how the Asian markets would open, but the moments of quiet and the remove from the hubbub, provided temporary solace, at least.
Posted by Ed McKeon at 8:29 PM