She's strong, she's capable, she has an Israeli flag on her wall 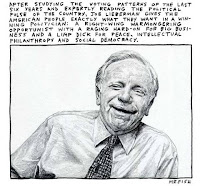 In nearly the same breath as he's dismissed Barack Obama for not being experienced to take the office of president, Creepy Joe™ Lieberman extols the virtues of a woman he barely knows, Sarah "Bush-in-skirts" Palin, and who doesn't have the experience to know that she's swum too far beyond the ropes. But she keeps a flag of Israel in her office.

If you can stand to be amongst a crowd of rabid Floridian Palin devotees, you can hear the entire introduction here.

Lieberman has joined the McCain dance-of-death, discarding his principles as if they were spoiled fruit, abandoning those he represents as if they were lepers and acting the impresario for a cheap, tawdry spectacle that mocks the Constitution he vowed to protect.

Give me another slice of that Country First Balogna.
Posted by Ed McKeon at 3:16 PM