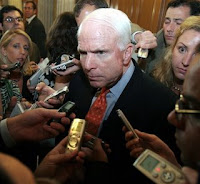 There's an old joke from third grade about a boy who steps in a gooey mess in the school yard. His friend says, "You stepped in shit." He says, "No I didn't. It's mud." His friend takes a fingerful of the muck and says, "It looks like shit. It smells like shit." Then he puts his finger in his mouth. "It tastes like shit." And then after considering for a moment, he says, "It is shit."

Joe Klein arrives at the same conclusion in an essay in Time this week. He accurately portrays a media fourth estate so bent on fairness that they miss the point - John McCain is slinging shit.
Posted by Ed McKeon at 8:13 AM