The last coins of his reputation 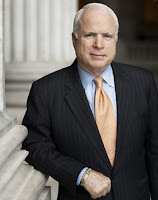 In endorsing Barack Obama for President, the New York Times has issued a beautifully-written, strongly worded recommendation of Obama's strengths, and a lacerating repudiation of George Bush's failed presidency, and of John McCain's divisive, desperate campaign.

The Times goes so far as to remind us that they endorsed Clinton over Obama in the primary, but that:

Watching him being tested in the campaign has long since erased the reservations that led us to endorse Senator Hillary Rodham Clinton in the Democratic primaries. He has drawn in legions of new voters with powerful messages of hope and possibility and calls for shared sacrifice and social responsibility.

As for McCain they also admit their error in endorsing him as the Republican candidate saying he "has spent the last coins of his reputation for principle and sound judgment to placate the limitless demands and narrow vision of the far-right wing."

As for his running mate, Bush-in-skirts Palin, her tone has only grown shriller as the campaign lurches from the gutter into the ditch.

In yesterday's kiss-ass interview with the ridiculously-biased hate-monger Sean Hannity, in which Hannity resurrects every already-disproven, already-discarded by any credible source, already-demonstrated-as-canard accusation, and forms them into softball questions, Palin shows herself as a hateful, ruthless, racist, vicious, unrepentant right-wing demagogue, and a simpleton who would stand side-by-side with Bush and push America over the precipice.