A curse on Creepy Joe™ from State Radio 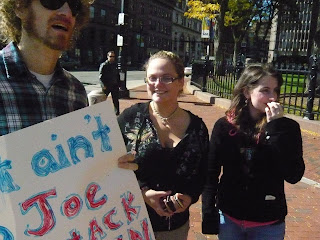 
Political rockers State Radio, from Boston, and on their Take the Country Back, tour stop at the Webster Theater in Hartford tonight. These political musical protesters released a razor sharp set of rock editorials on an album called Year of the Crow, this year.

On all their tour stops they make a point of organizing a political action of some sort, ranging from registering voters, knocking on doors for Barack Obama, and leading protests. 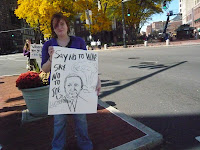 In Hartford, at noon, they gather a small group of fans to a few words of suggestion to our Senator, Creepy Joe™ Lieberman.

The three piece band, along with their road manager, and their roadie, helped write slogans on placards. They were shooed off of Constitution Plaza (imagine free speechers being chased from 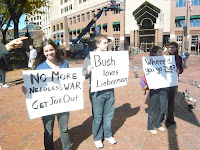 CONSTITUTION Plaza), by a security guard who told them they were on private property.

They reassembled across the street from the building in which Lieberman keeps an office, finished up their signs then flashed them for the noontime lunch crowd, and for passing traffic. Judging by the smiles, waves and horn beeps, many of those passing by agreed with their sentiments.