Two evenings at the Strip Club Anyone who's been on the road understands that after a long day of work, it's comforting to find some flavorful food, a cold drink and restaurant staff who don't act like their doing you a favor by serving you.

I usually peruse the local alternative newspapers (the wealth of restaurant on the web is often overwhelming, and nothing more than clever marketing), for reviews. The review of The Strip Club (they specialize in locally-raised, grass fed beef strip steak from humane purveyors) rang all the right notes; the restaurant in in a historic building that once housed a grocery and butcher shop near our St. Paul hotel in the Dayton's Bluff neighborhood; they reveled in their meat dishes; they were noted for their traditional cocktails, and local beers.

We arrived without a reservation on Tuesday at around seven, and though the restaurant seemed to be in a funky neighborhood far from the main city thoroughfares, the restaurant and bar were packed.

We were greeted by one of the owners, Tim Niver, who was bustling between maitre de duties, to delivering drinks and diners to tables, to chatting up diners. He told us we might find a space at the bar in twenty minutes, or a table in thirty, but we were welcome to stand in the small place, have a cocktail, and see. He wasn't guaranteeing a thing, but he was sincerely and extremely friendly, always saying, "You're okay," as he dodged around us with an armful of plates on its way to a table. 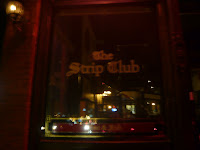 We finally found a single seat at the bar, and met Dan, the bartender, who bragged about being the first bartender in the Twin Cities to make his own bitters for the traditional and signature cocktails he took pride in serving (boxcars, old fashioneds, manhattans). I had a local maibock and ordered the daily fois gras special which was tasty and exquisite, as was the maibock.

Another seat opened at the bar and we ordered. I had the "Blue Movie" a Northern Lights bleu cheese strip steak with scallions, and generously-buttered carrots. The staff was friendly, made us feel at home, and Dan and one of the other owners, Aaron Johnson, kept up a friendly banter about food, books and the Twin Cities.

We decided to make reservations for the next night.

Wednesday the place was not nearly as packed, but the staff was as friendly, the food as amazing, and my signature Manhattan was flavorful and unique. I ordered a filet special with a house spice blend crust which was amazing, and while my co-worker Crystal, suffered an upended water glass from the upper level ("First time that has happened since we opened," Niver apologized), the experience made us feel completely at home as "regulars."

The restaurant bought Crystal's dessert, a gluten-free chocolate torte, and the diner who spilled the water offered to buy her meal (she suggested he make a donation to CARE), and we left vowing to return on our next St. Paul shoot.
Posted by Ed McKeon at 8:54 AM

So, how do those dinners & cocktails add-up when you do the jogging miles conversion? Oh yeah, I for got...road meals don't count!