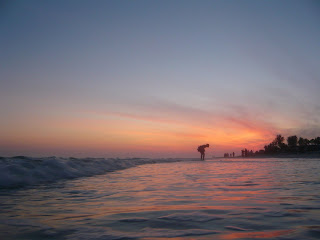 Sanibel has been known for centuries as a shellers paradise. If you haven't met a sheller, or don't know what one is (I've never been introduced to anyone at a cocktail party as, "Ed, this is Jerry, he's a sheller,"), you will encounter dozens on the beaches of these tiny islands. It all began with the Calusa Indians, who used the shells for tools and weapons, and even the invading Europeans could not help but engage in the Sanibel stoop - the position of choice for examining the beds of skeletal remains of formerly-living mollusks.

In truth, you are less likely to engage the eye of a sheller, which is usually embroiled in examiningg the tideline for an elusive Junonia, than you are to get an eyeful of a sheller's hind end.

When I am not on this island, I am not a sheller, but even with a conscious effort not to be one, I find myself, like most visitors, struck with a compulsion to pull pockets full of chambered nautiluses and bivalves from the sand, return them to our rented condo, and then stuff them in a suitcase to carry back to New England. They leave the clothes in my suitcase smelling like a fish sandwich left in a puddle in the sun for three days. Inevitably, the shells, once so eagerly sought after, are cast into pile of gravel in my backyard.

Though there is some value still in finding a very rare, or very large shell, these days most of the shells themselves must be appreciated for their intrinsic value. No longer passable as wampum (though those days may come soon enough), or as with any trading value as an exotic in a European market (though those days may come again), or with any manufacturing value for things like mother-of-pearl (those days are probably gone), the shells are virtually worthless, unless you can figure out something to do with them, which some, who have a creative bent, have done along the beach. 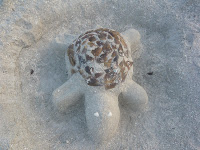 There's always a tribute to nature and the sea itself. 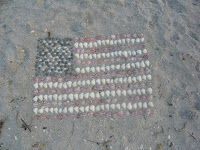 You can honor your country. 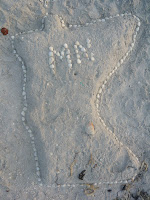 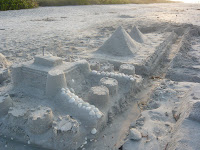 Or a Vegas casino. 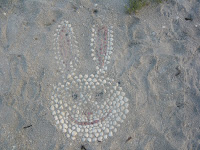 Or the Easter bunny. 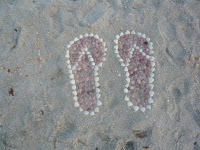 Or your sense of style. 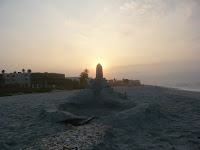 But of course the most obvious honor, is man's tribute to the thing he finds most precious. And though man has erected a edifice honoring this thing before (Egyptian obelisks, the Washington monument, the Eiffel Tower, the Chrysler Building), he finds himself compelled to do it again, on the beach.
Posted by Ed McKeon at 10:30 AM

Labels: sanibel., second to last walk on the beach