I got an ABC freebie 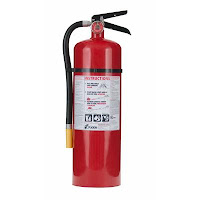 I spent many of my summers and days off, growing up, filling fire extinguishers. My dad was a fireman with five kids and his "moonlighting" job was as the owner and proprietor of Columbia Fire Extinguisher.

I carried old school soda and acid fire extinguishers up and down stairways in schools, department stores and factories all over New Britain. At about twenty pounds (one in each hand), it was the equivalent of a stairmaster workout every day. And the sulfuric acid burned tiny holes in my jeans that were the envy of every hippie girl who saw them. I also filled pressurized water and powder extinguishers in the company headquarters (the basement of 86 Columbia Street - get it).

A few weeks ago I saw a neighbor throwing pans of water on a fire in the engine compartment of a car he was fixing.

"You need a fire extinguisher?" I asked.

"You got a fire extinguisher?" he asked back.

He used my household ABC ten pounder to put the fire out readily.

I was left with a half-pressurized extinguisher and no idea where to turn since the basement business has closed down.

I eventually called Roybal Fire Extinguisher, the Middletown company that bought my dad's book of business, and watched as Larry did the refilling. He had some tricks and gadgets that my dad could never have conceived of, but the process was similar. When he was done, I told him how I spent many a summer doing just what he did.

He handed me the fire extinguisher, and said, "This one is on the house. Compliments of Roybal."

It somehow made all those sweaty summers worthwhile.
Posted by Ed McKeon at 6:35 PM