My craven craving has caved-in 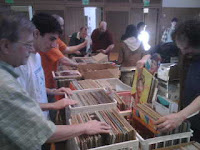 Today I realized that a lifelong obsession has slipped away. Never, never, have I been in a room filled with boxes filled with old LPs, where I had no desire to flip through them, much less consider buying some old mint copy of early Family music.

After all, I have most of the music I love in a tiny computer about the size of a deck of cards, called an iPod (it's pretty miraculous - ever hear of it?). It was in my ear when I first walked through the WESU Record Fair this morning at Wesleyan, and I only took it out when Ben started spinning music.

There were far fewer CDs in the room, and maybe had there been more, I may have been more interested, but I've released the analog fallacy, and realize that it's far simpler to pursue music I love on a digital basis, right here at the keyboard.

I should have guessed it was going to happen today when I offloaded thirty of my long-held LP on the WESU table for the station to sell. I never did play that second Boomtown Rats album much anyway, and I doubt I played the New Order LP even once.

It was all a bit of a relief to walk out of the room empty-handed, one more demon behind me.

The Record Fair was a big success, thank god, because unlike me, not everyone has dispatched of their vinyl fixation.
Posted by Ed McKeon at 8:12 PM