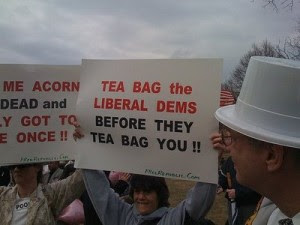 Most of you have heard about the Tea Parties scheduled for tomorrow which have been organized by conservative groups to protest the alleged tax increases by Barack Obama.

Not only is the "grass roots" movement a charade, as Paul Krugman explained this weekend, the use of the term "teabagging" by the group's organizers turns out to be a very funny miscalculation.

According to the web's UrbanDictionary the definition of "teabag" is: Dipping your testicles into the open mouth of another person. Kind of like dipping a tea bag in and out of a cup of water.

Wouldn't it be hysterical if someone discovered that this supposed nationwide grassroots movement was the work of Tetley's?

(They have those tiny little tea leaves you know)