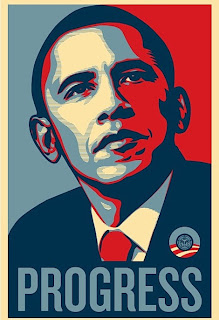 You would think here in New England we'd be over it. Ten years ago I could understand. Back then, the Red Sox hadn't won a World Series in more than eighty years. In the past five years, they've won two. The curse of the Bambino never existed, did it?

But every Barack Obama supporter I meet is wringing his or her hands about his chances of winning. The polls show a healthy lead (the polls can be wrong!) Hundreds of thousands of new young voters have registered and mostly Democrats (young voters notoriously don't vote!) He's bright, inspiring, intelligent, charismatic (he's black, and we're a nation of closet bigots!) People are lining up for hours to vote for him (the lines! the lines! they'll discourage voters!) Look at the crowds he draws (Sarah Palin draws crowds too!)

Hell, let McCain scorn Obama for spreading the wealth. He doesn't understand that most American's like that idea. Let him laugh at Obama's inexperience. Isn't that what being a real maverick is all about - a combination of naivete and boldness? Let him pull the skeletons from the closet. He's unearthed a few of his own rotting corpses. Let him infer that Obama is different (an African-American Muslim). The Americans that belive that bullshit have mourned the passing of the Weekly World News.

Americans are both smarter, and less prejudiced than anyone is giving us credit for. And there's even a few of us who like the idea that Obama hung out with Reverend Wright, Bill Ayers and Rashid Kalidi. I'm all for a man who will break bread with those he doesn't agree with in the hope of discovering an idea worth fostering, a commonality worth nurturing.

This is America, Jack, where we're supposed to brag about leaders like Barack Obama. Where we're not supposed to give a shit if someone is a Catholic, a Jew or a Muslim, or whether the shade of his skin is different from our own. Where an education at the finest schools should be applauded and envied. Where even a kid from a poor, one-parent family can grow up to be president.

I'm sick of the tired xenophobia which kneels at the altar of rigid patriotism, deaf dumb and blind zealotry, and hands-on-our-heart pledges allegiance to the fabrication of a nation which has never existed.

This blog endorses Barack Obama, as if that has any meaning at all. But I think he's gonna win big, and if you don't believe me, ask a bookie.

The folks who have real money on the line (and that's not the pundits or the pollsters, who, like the weatherman, get paid even when they're wrong), are giving Obama odds of 1.11 to 1 and McCain odds of 10 to 1 of winning.

You would think here in New England we'd be over it...But every Barack Obama supporter I meet is wringing his or her hands about his chances of winning... Me, I'm banking on a landslide...I think he's gonna win big, and if you don't believe me, ask a bookie.

Maybe the mistake you're making here is that you're focusing on the qualities of the candidates and the will of the people, as measured by pre-election polls. Could you be overlooking the fact that in the last two presidential elections, the will of the people was not accurately measured? (It's odd that the human mind can be so good at perceiving patterns where they don't really exist -- such as in a stream of random events -- but it can be so inept at identifying some patterns that really do exist.)

For your consideration, I submit this paper: The Unexplained Exit Poll Discrepancy, by Steven F. Freeman of the University of Pennsylvania. Speaking of the 2004 election results in Florida, Ohio, and Pennsylvania, the author claims to have "(1) documented that, in general, exit poll data are sound, (2) demonstrated that it is exceedingly unlikely that the deviations between exit poll predictions and vote tallies in the three critical battleground states could have occurred strictly by chance or random error, and (3) explained why explanations for the discrepancy thus far provided are inadequate."

I hope you are correct, and that the things you cite can generate enough support to overcome the (very likely) effects of fraud and voter suppression that's been present in the past two elections. However, I am more inclined to believe they will, together, reduce the clear lead than Obama enjoys in public support to a near dead heat with McCain in several critical swing states -- including Pennsylvania.

I'd be interested if any flaws are identified in the linked paper, and I'm certainly curious what your thoughts might be about the possibility of real, but nearly un-reported, threats to our electoral process, and thus to our democracy. James Carville recently alluded (I think) to this very threat on a cable news show a couple of weekes ago, when he predicted widespread chaos if the the polls showed a clear Obama lead going into election day, but McCain still wins.

Please let me be wrong.

Correct as always, Pete. It's really the only thing that scares me. And I think a landslide will make fucking with the vote impossible.

Congratulations, Ed, on your great call! I don't think I've ever been happier to be proven wrong. Maybe the glass has been half-full all along?