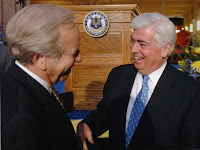 So now Chris Dodd is channeling Barack Obama, and, according to the Hartford Courant, he's saying that the last thing the president-elect wants is a messy fight over Creepy Joe™ Lieberman.

"What does Barack Obama want?" Dodd rhetorically asked reporters Friday in Hartford. "He's talked about reconciliation, healing, bringing people together. I don't think he'd necessarily want to spend the first month of this president-elect period, this transition period, talking about a Senate seat, particularly if someone is willing to come forward and is willing to be a member of your family in the caucus in that sense."

ADDENDUM (According to this Washington Monthly piece, if Obama allows Lieberman to keep his chairmanship, he allows it at his own risk)

There seems to be two things going on here. One, Chris Dodd, a longtime "friend" of Lieberman is still looking for absolution for supporting Lieberman's opponent, Ned Lamont in the Senate race two years ago.

The other is the protect-your-own colleagiality of the Senate. And while Lieberman shat on this brotherhood repeatedly, by the unwritten rules of this august organization, his defiling act must be forgiven because he is, after all, a brother Senator.

Of course Dodd, who still faces his own problems (remember he is a "friend of Angelo" too), might need the support of his Connecticut senatorial colleague when push comes to shove.

I wouldn't count on it Chris. It's obvious that Lieberman cares about one thing, and one thing only, Lieberman. When he can't win an election legitimately, he changes the rules. When he can't convince his fellow Democrats that the war in Iraq is a wonderful thing, he embraces George Bush. When he sniffs the opportunity to be a powerful cabinet member, maybe even a vice president, he becomes a Republican attack dog on the presidential campaign trail. And now that his bet hasn't paid off, he wants his old job, and his old perks back.

You think Lieberman is going to stick his neck out for you, Chris? Better think twice.

"The question I have to ask myself is: Joe was elected by the people of this state — independents, Republicans and Democrats," Dodd said. "Whatever anger there may exist within a party, I don't think that ought to be visited on the people of the state — and they shouldn't be asked to pay a price for people's political decisions."

You've got to be kidding Chris. Have you talked to any Constituents lately? (That, of course, is, itself, a rhetorical question since you've been laying very low because of the Countrywide scandal.) Most of us would be very happy to have Joe go away, far away.

Lieberman gambled his power and authority in the Senate for a chance to sit on McCain's right hand in the White House. That bet didn't pay off. So now we, the citizens who "elected" him, are left with a flaccid representative unable to wield any influence for his home state.

And what if McCain won? Lieberman would have abandoned Connecticut in the wink of a Palin eye. And he wouldn't have looked back.

Lieberman's been absent from the Senate for the past eight months while he's campaigned for a Republican. We didn't miss him. (You've got some 'splaining to do on that account yourself brother Chris.)

Resign from the Senate, Joe, and do it quickly. That will avoid the messy politics Chris Dodd is talking about. At the very least, if we really care about avoiding a "mess" Dodd ought to be urging Harry Reid to make an immediate, swift and righteous excision. After all, it's not the Senate, or the electorate, Harry Reid or the Democratic caucus who is making this affair "messy." It's Lieberman again. If he had the dignity to truly embrace reconciliation in the White House and Senate, then he'd leave Washington as soon as possible, return to Fairfield County and spend his time drinking top shelf gin as he sits and commiserates with his hedge-fund-manager neighbors.

Right now, Connecticut has two Senators in trouble. Both are avoiding their constituents. (Have you checked your approval ratings lately?) But it's apparent they are watching each other's back.

But who's watching out for Connecticut? Ned Lamont would have been.

Actually lamont is just another rich white boy from greenwich. He is part of the problem, not the solution.

Fair enough. But it's accurate to say nearly "anyone but Joe."

Joe is so full of holes that he will die a natural and righteous death if left to his own devices.