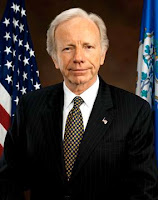 
Watch out, Connecticut, Harry Reid's on the kiss-and-make-up trail.

After scolding Creepy Joe™ Lieberman, Reid's making smoochy noises. That precedes a hearty invitation for Lieberman to remain in the caucus and to keep his chairmanships.

Listen to what Harry has to say about our unapologetic excuse for a Senator:

Reid's advances are, I'm afraid, all just a prelude for him to make excuses ("I confronted him. I told him he was a so-and-so. Then I begged him to keep his chairmanships,"), make amends ("I've known Joe for years, and even though you can't trust him as far as you could throw him, he's a fine colleague who votes with us most of the time, except when it counts,") and then welcome Lieberman back with a tearful bear hug, ("He told me he'd never do that again.")

Which is why we need to find a new leader in the Senate, too.
Posted by Ed McKeon at 10:44 AM

I believe John Brown's body was molderin' rather than smolderin' in his grave...