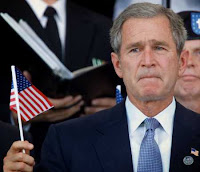 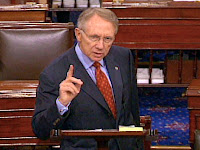 All week long I've tried to write a blogpost about the failure of American leadership at nearly every level. I've deleted more paragraphs than have ended up in this post, and all that remains is the original blogpost title.

I know I'm not alone in my dismay and disregard for the people who run this country, and who run the big companies in our national and international marketplace.

In my naivete, I guess I expect more from people who have been elevated to positions of power and responsibility, then most of them seem able to deliver as fallible humans. And we as followers, constituents, employees, citizens are frequently too weak or unwilling to throw the bums out, and wrest control of the whole shebang ourselves.

My disappointment is sharpened to a jagged edge this week by the failure of the Senate to impose justice on Senator Lieberman, by auto execs who fly to Congressional testimony in private jets, by insurance companies buying banks so they can be part of the financial (handout) bailout, by bailed-out insurance and bank execs using taxpayer money for bonuses, by a President-elect for whom I still hold out hope who is selecting Clinton has-beens and warhawks for his cabinet, by a lame-duck president who, when he is not absent, is still saddling us with ruinous regulations and by our insistence on using an relentlessly unstable, woefully complex, Wall Street, run by frantic, greedy traders who are like ADD students on amphetamines.

These are whom we choose as our leaders. And when things are going well, we hang on their every word. Read about their amazing exploits. Try to divine the source of their genius. Buy magazines filled with their pictures. Covet books filled with their marketing and management secrets. Crowd auditoriums just to be in the same room with them. Pay them millions of dollars to run our companies, and our country. Hail them as heroes. Weep when they die.

Until the world proves they are asses, and we were bigger asses for thinking they weren't.

I know it's exponentially more complex than I am making it, but:

- How does laying off 52,000 employees help a company or the economy? (doesn't it make both worse?)
- How does laying off 52,000 please investors when most of the laid-off were shareholders, and most of us, who have money in 401K accounts, and mutual funds, can't be happy that such a move will be ruinous to an already ruined economy (Citigroup BTW, fell below the $5 a share threshold and now cannot be held in mutual fund accounts)
- What does the opinion of investors matter when we now know they know so little about anything? (This quote from the Hartford Courant this morning really stuns me - does this "consultant" really believe he knows what he's talking about, or that any of us believe him anymore, when he says: "Investors are concerned about the guarantees embedded in life insurers' balance sheets related to variable annuities," said Donald Light, senior analyst at the Boston-based consulting firm Celent. Some annuities linked to equities "guarantee a minimum level of appreciation, and when the underlying equity investments plummet, that creates liabilities.")
- Doesn't laying of 52,000 employees mean, potentially, 50,000 less TVs purchased, a couple thousand less cars purchased, several hundred less refrigerators and sofas purchased?
- Does laying off 52,000 employees mean the CEO gets to keep his bonus?
- Does any CEO still think that he or she really has a handle on controlling their company, much less the way their company operates in a marketplace controlled by unfathomable forces?
- Can we ever really consider bailing out auto manufacturers who refused to create fuel-efficient cars, much less green, alternative-energy cars?
- Aren't the reprehensible executives and traders who have crippled our entire globe more criminal than someone who rips off an ATM, or robs a bank? Where is the exploding red dye pack for the corporate criminal who walks away with the money earned on the backs of employees and customers?

What this world needs right now is a little calming down. Let's shut down Wall Street for a month. Put a moratorium on layoffs and foreclosures. Ban all executive bonuses. Prevent lobbyists from getting any closer than 500 yards from the Capitol. Kill No Child Left Behind. Freeze the assets of every CEO who has led a company to bankruptcy. Let's build some roads, and bridges, and schools and theaters, and thousands of electric cars. Let's demand that every big box store in every community fill their roofs with solar cells, or shut down.

Lets move quietly through the holidays. Treat each other well. Exchange small gifts. Treat our earth as the precious resource it is, and understand that the only way we get through this, is together.
Posted by Ed McKeon at 2:50 PM

I have been working on my own explanation of why our government is not listening. I call it the 5-Part Trilogy.

The real Trilogy is:

The fourth part of the Trilogy is the Fourth Estate - the dreaded MSM. The fifth element is the dreaded, uneducated public.

I intend to discuss this to death on my WESU Radio Show, giving as many examples from every level of government as I need to prove the universality of this theory.

You are invited to come on the show and help me either prove or disprove the 5-Part Trilogy.

All the Best,
David Bauer

Well said. Would that you were in charge.