Why they began calling it the boob tube long ago 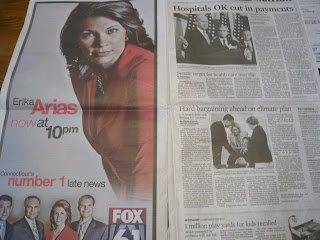 I'm guessing it's intentional. Some smart, pissed-off layout artist knew that the best spot for a full-page Fox 61 ad promoting the beauty and bosom of a Fox 61 "news reporter" was on the page following the story in which Shelly Sindland's complaints against the station were aired.

The lucious, pouting lips, the red form-fitting dress, and the perky, though modest, mammaries of undoubtably-brilliant reporter, Erica Arias, is printed on the backside of a news sheet in which a story about discarded-cutie Sindland, is given the gutter, and placement below the important "cheetah import" story.

Sinland has accused the management of Fox 61 of age and sex discrimination, and if the recent set of newspaper ads is evidence, she likely has a case.

It seems that Fox 61 has given up on promoting the frumpy news writers of the Courant as new TV stars, and has settled on the age-old ploy of selling beauty and breasts as they parade their young and handsome hi-def fodder in large, full-color newspaper ads that look like Hollywood ads for the latest light summertime comedy. 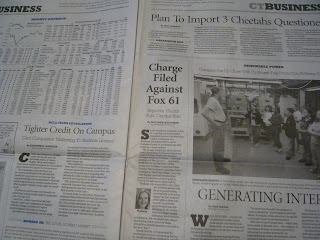 These insulting news pin-ups are only the latest insult to anyone with half a brain. The newly designed front page, from which real stories have been banished for mini-headlines, teasers and news-ish crudités, is yet another laughable attempt by the new management to recruit young readers. Instead they are driving the core readers, guys like me, away. When was the last time you caught someone under 30 with a newpaper in their fist and they weren't chasing a housefly?

BTW, if the Courant were not owned by the Trib, and joined at the hip with Fox 61, do you think the Shelley Sindland story would have been buried in the business section? Exactly. It's the kind of front-page gossip story that sells papers, except if the paper in question is run by the manager, Richard Graziano, who is the focus of the complaints.

Also, BTW, I'd have tuned in if I'd have known is was "Big Boob Friday." Personally, I think every newscast on WTIC-TV Fox 61 is anchored by big boobs.
Posted by Ed McKeon at 2:57 PM

Wow! What timing with the Fox TV "Pimp My Ad" page.

I was going to say how ironic it was to run that full-page Fox TV Sex Ad in the same edition as the somewhat hidden harrassment suit article. But it's not ironic at all...it's just plain stupid (not that it isn't stupid, ignorant, sexist, etc, etc, etc to run a TV News Sex Ad at all these days.)

Goes to show what a-holes are in charge at The Fox TV Courant. Or maybe they aren't really running their own store? Or even reading their own rag??