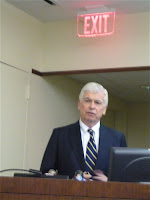 Somehow, I'm not sure this is exactly the point Chris Dodd wants to focus on right now.

In an email blast, new CT Dem communications director, Colleen Flanagan castigates Dodd's Republican opponent Rob Simmons for his "lackluster" fundraising. The sneering tone of the email makes it kind of a schoolyard taunt. It's completely unappealing, and I have no use for Rob Simmons:

Rob Simmons, the darling of the state and national Republicans, and clear choice for his party to take on Connecticut Senator Chris Dodd, posted his fundraising numbers today, raking in a pitiful $750,000 in 90 days. Combined with his lackluster first quarter total of zero, Simmons has averaged a pathetic $375,000 per quarter, ensuring a bloody Republican primary before anyone is even chosen to run against Dodd.

“Is Rob Simmons running for Congress again or is he serious about running for the U.S. Senate?” questioned Colleen Flanagan, Connecticut Democratic Party Communications Director. “With an embarrassing total for the second quarter, combined with his pitiful average of $375,000 per quarter since he got into this race, it’s a valid question, and one that Connecticut and National Republicans are surely asking themselves, as well. While he was billed as the frontrunner by national and state Republicans to take on Chris Dodd, this is a huge blow to the guy who had already picked out the color of the drapes and chosen his office on Capitol Hill.”

Of course, it's completely naive to think that fundraising is not an essential, maybe the essential component of successful politicking these days, but considering the sticky spot Dodd is in with the voting public, does the new Connecticut Democratic Communications Director really want us thinking that Dodd is spending a lot of time courting lobbyists and influencers who might have some effect on his votes in say, the new health care bill. This from NPR, July 8:

It was a hectic day for Dodd, who is chairing the Senate Health, Education, Labor and Pensions Committee while the official chairman, Sen. Edward Kennedy (D-MA), is being treated for cancer.

When the committee took its lunch break, Dodd dashed off to meet with President Obama about another huge project he is spearheading in the Senate — fixing the nation's financial industry.

But squeezed in between the committee meeting and the White House, Dodd made one other stop: He popped in at a fundraiser — for him.

The fundraiser was a $1,500-a-plate luncheon, hosted by two lobbyists, with proceeds going to support Dodd's re-election campaign.

The lobbyists hosting the fundraising event work for U.S. Oncology, a major provider of cancer drugs and services. Their business is all wrapped up in the health care proposals.

According to Dodd's campaign manager, there were other donors in attendance — not just those with a stake in health care policy. But this scenario is a snapshot of something that happens all the time on Capitol Hill.

The efficient, successful, fundraiser at work. Not the picture I would guess Dodd needs painted of himself when he's trying to dig himself out of a hole lined with accusations about his connections to people of larger influence than you or I.