Hello I Must Be Going 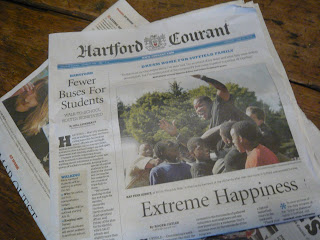 The Hartford Courant arrived on my doorstep this morning (though they have called and threatened that it won't be much longer if I don't pay my bill), and the vertical has become horizontal once again.

With the logotype at the top of the page once again, there won't be mistaking the front page for a section header anymore.

But the blue highlights and subheads are horrible (as if a single color was somehow going to hike The Hartford Courant's circulation). And, if it is possible, there seems to be fewer words than ever on the front page.

It's nice to see Roger Catlin's byline on the front page, but really, is a major headline and photo about a TV show filmed in the state really the most important news of the day?

Finally, that ridiculous, and insincere "thank-you" for participating in the selection of a new look for the paper is galling. Do the editors and publishers really expect us to believe that they made a decision about how the paper was going to look only after a week's reflection in which they actually considered what readers thought about the shift? 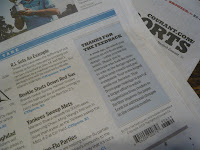 In my mind, it's more important for the editors to rededicate themselves to the pursuit of the truth at whatever depth it might be found (and find a design which reflects that), and not print some bogus "thank-you" which only reflects a public relations effort to make readers feel like they are somehow involved.
Posted by Ed McKeon at 12:01 PM

It's a sinking ship, so maybe we should let it die with what dignity it has left. Wait...come to think of it...The Chicago Courant may have already cashed-in its dignity credits?