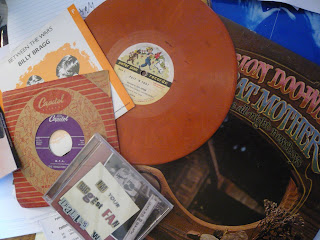 Virgin Megastore in Times Square is closing. And while that should bring few to tears for a music store that was more like a mall than a music store, it is a portent of the doom that continues to dog the commercial music industry.

I've got many of my own memories of my obsession with recorded music. It begins in the late 50's with the recollection of a record player which warmed from within by the vacuum tubes glowing behind a metal grate, and set ablaze by the music and other sounds that were emitted from its wildly spinning platter.

We had inherited 78 rpms that played Fred Waring and the Pennsylvanians posing as L'il Orly, and Warner Brothers cartoon audioplays, with Mel Blanc creating all the characters. We had snippets of great classical works on 33 1/3 rpms (my favorite was the march from Carmen) that came home in the grocery bag as shopping premiums from the First National supermarket (a new concept in itself at the time). And most mysteriously, we had little 45 rpms that my pre-teen sister brought home, with the large center hole plugged with an art-deco adapter. I remember playing some rock and rolling tenor singing over and over, "Everyday it's a gettin closer..."

Then, as that pre-teen sister became a teen, my father brought a stereo into the house, with the ubiquitous "stereo demonstration" album, and a collection of classical marches. But the magic began when my teen sister began to play the Rolling Stones and the Animals. And my younger sisters screamed to the Beatles. And I, well, I won that copy of Dylan's Bringing it All Back Home, at a church bazaar, and it was never the same. I always wonder what the Catholic church would think if they knew they had planted the seed to my own rejection of their medieval tenets.


I collected a pile of 45's, and a bigger pile of albums. I was floored when a high school friend showed me his father's component stereo, and I had to have one of my own. Still, with my lawn mowing money I couldn't afford the Harmon Kardon components, so I plowed my dough into a Radio Shack set-up with some really big speakers that blanketed my dorm room with Muddy Waters, and Paul Simon and Family and Ike and Tina and Jeff Beck and Leo Kottke and an exotic band from Jamaica called The Wailers.

I discovered that by writing reviews for my college newspaper that record companies would cram my mail slot, each and every day with four, five, seven free LPs, to the envy of each of my dorm mates.

As a corporate worker in Hartford, I spent hours browsing the racks at the late, lamented Capitol Records, or at Integrity 'n' Music in Wethersfield. During the day I would labor writing training manuals for general liability insurance, and at night I drifted off to the pounding anger and rebellion of the Clash, Elvis Costello, Fear, XTC and the Ramones wailing to me through those Radio Shack speakers, though spinning on a much more expensive turntable.

Travelling for work or vacation, I always found myself in a record store, usually an independent, where I would try to find the elusive LP, or the local hit.

I re-discovered some of my Capitol Record cronies at WWUH, where I've spent 25 years spinning a variety of disks.

I was an early adaptor of CDs, and later, MP3 and MP4's, but I still haunted record stores where I could find them, until, one-by-one they seemed to disappear. Sure there are a few wonderful holdouts in Connecticut, Brass City Records in Waterbury and Integrity 'n' Music in Wethersfield, but their glory days are behind them.

And when I get there, I can still spend hours in a store like the great Amoeba, the rumpled Bleeker Bob's in NYC, Turn It Up and Dynamite Records in Northampton, Grimey's in Nashville, and In Your Ear in Cambridge.

It's not any wonder to me that folks are making movies about the loss of records and record stores, but I don't think there's any reviving this dead horse. It's gone, and it's time to move onto what's next.