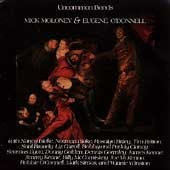 As a fourth generation Irish-American, the idea of drinking green-tinted Budweiser, or doffing a plastic leprechaun hat is as repellent as Barry Fitzgerald's stage Irishman was to a generation of Irish-American intellectuals trying to shake off the cliche of drunken incompetence.

But I'll hoist a Guiness or a Jameson's , play some Solas, and even sing a chorus of Sally McLannane among friends, though Shane MacGowan has done as much for the resurrection of the sodden stereotype as Barry Fitzgerald ever did. 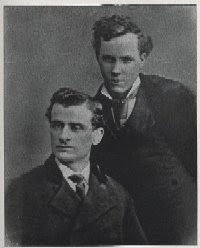 On St. Paddy's, the song that comes into my head is Muldoon, the Solid Man. I heard Mick Moloney's version first on his album Uncommon Bonds, and took it as the unvarnished tale of an immigrant.

Come to find out, it is not a traditional folk song, but a stage song, written by one of the stars of 19th century American musical theater, Edward Harrigan (of Harrigan and Hart - that's them on the right). The song debuted 135 years ago this month in a Harrigan and Hart play called Who Owns the Clothesline? The play tells the tale of a dispute in an Irish tenement. Since the book of the play did not survive, it's not clear who Muldoon is, but historians are certain that the song draws a satirical picture of an Irish politician who is not nearly as accomplished as he pretends to be. So, for example, when Muldoon declares that his constituents summer on the island, "To enjoy their summer’s recreation and take the enchanting East River air," he's referring to Blackwell Island prison. 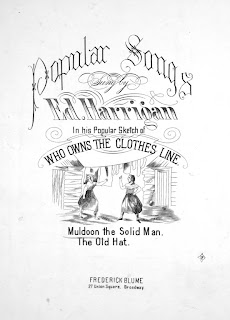 The only performance of the song I could find on the web is one by a bedroom band who call themselves AII (American Irish Italian), which for all it's lack of production value, is actually a quite good peformance.

BTW, no less than James Joyce namechecked Muldoon in Finnegan's Wake, but there's not much Irish that he didn't namecheck in that runaway stream of consciousness masterpiece.

I am a man of great influence, and educated to a high degree
I came when small from Donegal and my cousin Jimmy came along with me
On the city road I was situated in a lodging house with me brother Dan
Till by perseverance I elevated, and I went to the front like a solid man.

So come with me, and I will treat you dacent
I’ll sit you down and I will fill your can
And along the street all the friends I meet
Say “There goes Muldoon, he’s a solid man.”

At any party or at a raffle, I always go as an invited guest
As conspicuous as the great Lord Mayor, boys, I wear a nosegay upon me chest
And when called upon for to address the meeting, with no regard for clique or clan
I read the Constitution with great elocution, because you see, I am a solid man.

I control the Tombs, I control the island, my constituents they all go there
To enjoy their summer’s recreation and take the enchanting East River air
I am known in Harlem, I’m known in Jersey, I am welcomed hearty at every hand
And come what may on St. Patrick’s Day, I march away like a solid man.