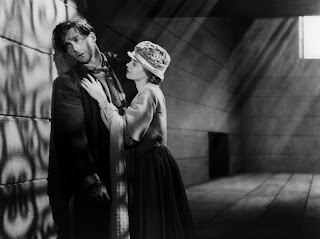 Last night, with Steve and Monica, we had sushi, and sampled the homebrewed beer that I made two months ago with Paul Rousseau. It was finally ready, and it was dark, lightly carbonated, sweet and strong.

Five shared bottles later, I fell asleep well before I should have, and missed the contra dance. At 1:37 a.m. I was wide awake, and turned to Fred Murnau's recently released on DVD, Sunrise (which I ordered through NetFlix) It's a silent film, and I thought, my best bet for beating insomnia.

I haven't seen the film since first semester senior year of college. I had a film professor who taught us film history in two semesters, neatly divided. Semester one was silent. Semester two was talkies. He warned us that watching silents would at first be challenging, but that soon we would fall into the groove, and never realize that sound films had been invented. By the end of the silents period (sound was introduced in 1928) semester, I was beginning to regret the invention of sound films.

Sunrise was made in 1927, and I remembered it fondly. Most of what I remembered remained true. By the end of the silent era, directors were making great visual art. Camera's moved. Lights were used inventively. Sets were a work of genius. And film technique (superimposition, mattes) was at its height. The next year Al Jolson sang "Mammy," and once again cameras were locked in immovable boxes, scripts were nonsense and the rattletrap of sound, and the economic collapse of 1928, destroyed film art for several years.

Sunrise bears some of the frailties of silent film. Oddly composed titles, with lots of dashes. Some histrionic acting. And the distraction of overcrank.

But the story is vivid and wonderful, and is about sex. infidelity, despair, murder, love and finally redemption. George O'Brien is wonderful as the tormented farmer. Janet Gaynor one had some trouble as the naive farm wife (though Gaynor won an Oscar, and O'Brien was not even nominated), but Margaret Livingston is perfect as the city bred seductress.

The film carried me through my sleepiness and reminded me that there are other silent classics that I need to return to for their grandeur, or their comedy.