God help me, I can't bring myself to avoid local WTIC-AM, hate-radio host, Jim Vicevich, if only to hear how devise (de-vicevich), he's become.

Here's the man who was denying there was a recession through October, suddenly blaming all the financial woes created by George Bush, on Barack Obama. And yes, finally admitting to recession.

Here's the man who believes in free-market capitalism, shocked, I tell you, shocked, at the greed of corporate bankers and Wall Street financiers. But declaring that the economy can heal itself, when the Chicago school of Economics has been roundly derided as a failed policy. Business leaders can't seem to police themselves.

Here's the man who excoriated the left for impatience with "the surge" now, talking about the failure of the stimulus package before it's even implemented.

Here's the radio host bragging about his fairness, hustling anyone who disagrees with him off the phone.

So I visited via the web today, and observed his vaunted "chat-room," a veritable circle-jerk of flat-earthers, zealots, conspiracy-theorists, science-deniers, wing-nuts, Hannity-philes and chickenhawks. And there, in the chat room, I found Jim's chat-room profile.

Hmmm? Vicevich claiming to be 43? That would mean he was born in 1965. That would mean when he graduated from Bucknell in 1974, he was 9 years old. And I though his self-proclaimed "genius" was hogwash. 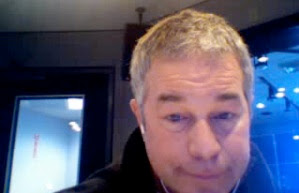 Still, his webcam shows a man who clearly is at least as old as his graduation year would make him out to be, 55 or 56. Or a very haggard 43.

Nothing wrong with being 56. That's how old I am. But I can't imagine ever trying to pass as 43, and Jim, based on this picture, I'd lay off that claim too.
Posted by Ed McKeon at 11:01 AM

One cannot blame Vice-a-bitch for his love and admiration of a George W. Bush. after all, they're very much alike. A lot of bullshit flows out of both of their mouths...and Jim has had at least as many failed business ventures.

When I first read this blog I thought it was run by a 14 year old.

Hey, thanks for the compliment. And when I first read your comment, I thought you had the courage to use your real name.

Just like you use your real name in chatrooms, right?

I don't waste my time in chatrooms, Jim. They're filled with people like you.

You're wrong, my friend. I'm not Jim. I am your average flat-earth believing science-denying wignut chicken hawk who wonders why it was patriotic to tear down the last president but now it's The Unforgivable Sin to even question the actions of this one. Who was tearing down who the last 8 years?

I use "Jim" in the way Hirth Martinez did when he sang, "Only in America, Jim." It's kind of like saying "Guy, buddy, pal, mac, mister, Jack."

See, guys and gals like you are all "Jim" to me. Not an original thought amongst you.

As for Bush, you seem to be one of those in denial who think that he actually did any good for this country. Look around, Jim, the world is a mess, and most of it can be laid at the feet of the president who never really was elected. But that's another story.

As for Barack Obama, I don't know where you got the impression that he is considered "perfect" and "above criticism." Obviously not from reading the liberal press which has been plenty critical. Oh that's right, you listen to Vicevich, and probably Limbaugh and Hannity, and you buy that brand of baloney. You call Obama the "savior" because you think that "we" think that he's divine. Another Limbaugh-made straw man for you all to kick to the ground.

Right, let's let the free market and the corporate execs, and the Republicans figure this one out. Sorry, Jim, but that's what got us here today, and you can't seem to admit it.

The fact that after 8 years you still believe that George Bush "stole" the election indicates a grave level of denial on your part. And that is the cornerstone of the utter rancor that most liberals harbored over
him. I may be an idealist of sorts but unlike you, I do not lump people in a group and call them "Jack" then say all "Jacks" do this particular thing. And contrary to your assessment of me, I didn't always agree with the former president's descisions. But I do feel as well as many others around our country that he is a good and decent man and has done what he thought was best for the country, just like every other
occupant of the oval office before him. The fact that you attribute all the woes of the world on one man indicates a refusal on your part to admit that the people you support had a lot to do with the mess the country is in now. Did he make mistakes? Yes. Nobody's perfect. But let's get back to the mess you claim he caused in the world: He inherited a recession which began during the clinton years when the housing debacle was in its infancy of unraveling; A process years in the making due to companies being forced to hand out loans to people who could not afford them. The towers were attacked, something that could have, and DID happen during another presidency. The tax cuts,
whether most liberals agree with them or not, helped the economy out of that recession and the country has been safe from attacks for the 7 remaining years of Bush's presidency. Another thing that most of the media mysteriously fails to mention is that he has done more for the
continent of Africa and its people than anyone else in its history. The world has had messes long before Bush and will have them well after him. And if we were in "the worst shape since the great depression" you and I would be fighting for a space and a lit garbage can under a bridge.
As for the new president. The only reason I'm forced to assume
most people almost worship him is the statements on CNN and MSNBC such as - the inauguration was like a "shrine" to Obama, and
that the "Doves must've been in awe at the site that day." And Oprah's likening him to "The One". And you can't forget those adorable children being forced to sing his Praises with "Obama's gonna lead us." They may not actually worship him, but it sure looks like that to me. But unlike most liberals with Bush I refuse to criticise Obama by using the
words "stupid" or "idiot". I acknowledge that he is my president and I will give him the respect he deserves as long as he sits in that office. But I will be vocal when I believe he's taking the country in the wrong direction, like this massive bill aimed at an authoritarian socialist style government that has never worked anywhere it's been tried.
But see, that's just me. I don't just listen to the Limbaughs, Hannitys and Vicevichs. I hear out the Matthews', Blitzers, and McEnroes. I'm nor a democrat nor a republican. I'm just an average American who assesses both sides of an issue before I come to a conclusion about something. You ought to try it sometime.

You're right. I shouldn't lump all people with the same uninformed opinions together and call them Jack or Jim.

You started this thread by calling me a 14 year old, thinking you were insulting me. Remember, it's right up there at the top.

Sorry, but I refuse to buy that bullshit that Bush is a good and decent man. Nor do I buy that you are somehow reasonable because you listen to things other than conservative radio.

I listen to all of that too, and you know what? It doesn't make me reasonable.

It's funny. You hear the other side of the argument, but all you can regurgitate is the hooey that the conservative wingnuts spew.

Bush helping Africa. Sure. You can have AIDS funding as long as you practice abstinence. Please give me a break.

Why don't you admit you're in the Limbaugh army and that you'll believe anything he says. He is the most balkanizing force in America. And he's doing it for money and ratings, not because he believes any of the baloney himself.

You think America's in such great shape? Dream on, Jack.

I agree with Anonymous. Whoever you are(never heard of you, I was trying to look up vicevich's chat room and clicked on your link. So I looked up your background. I was not at all surprised. You have no understanding of economics. None. You were an English major, a writer. I am in education and invariably students who are good writers but are not interested in studying how markets work, not interested in business at all, aspire to be writers. Fine. Write. But you should know one of the cardinal rules of writing is, write what you know. You don't know economics, McKeon. You probably still believe the New Deal did more good than har. Even are most economically clueless history teachers have the kids read about how ineffective it was. It is in the text books. You are idealistic, not realistic. So no one will be able to teach you how economies work, because there are realities you can't face. You think you know, but you don't. Vicevich is abrasive. He is often arrogant and patronizing. But he knows what he is talking about when it comes to the psychology of business. Go write a novel.

Ted, I really appreciate the fact that you didn't blog anonymously.

I was an English major, true. And I speak and write English so I guess it paid off.

I did not study film, but strangely, I've made a very good living, quite successfully, making films for a living, and running a production company (something our friend Jim failed at, BTW). Go figure.

I think you have the mistaken impression that what you study in college is the only thing that qualifies you to succeed in life.

I don't think so.

In fact, I took economics courses in college, and enjoyed them. I did well in them. If Vicevich is a product of an education in economics, I'm sorely disappointed in our education system.

His grasp of economics is childish, wrongheaded, often just plain wrong, vacillating and based on conservative political philosophy, not economics. Remember how in August of 2008 he was trumpeting the stock market and denying the recession. He was terribly wrong on both accounts. But having a loud mouth has no relation to having a good memory, I guess.

Surely you can understand that someone who doesn't agree with your ideas about economics is not wrong, necessarily, but of a different opinion. Otherwise all economists would agree. And they don't; do they?

I do believe the New Deal did more good than "har" (sic). I suppose you think the free market really exists, and that it works. Har.

Jim knows about something, all right. He knows how to get ratings by inflaming a tiny right wing audience.

BTW, the novel is written. Know a good publisher?