Hanging out in New Brit-uhn, for a few hours 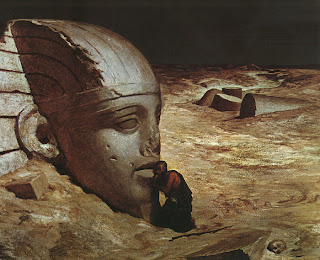 I finally made it over to the New Britain Museum of American Art to catch the terrific exhibit, Double Lives: American Painters as Illustrators, which follows their great pulp art exhibit of last year (some of those canvases, part of Sanford Low's collection of American illustration, can now be seen in Hartford at the new satellite museum of NBMAA, at Theater works on Pearl St.)

I went specifically to see Elihu Vedder's "The Questioner of the Sphinx" which caught my eye in an art survey text as an undergrad, and led me to write a paper comparing the canvas to the great Shelley poem, Ozymandias, easily one of the best contemplations on mankind's frailty, and empire's impermanence.

I met a traveller from an antique land
Who said: "Two vast and trunkless legs of stone
Stand in the desert.
Near them on the sand,
Half sunk, a shattered visage lies, whose frown
And wrinkled lip and sneer of cold command
Tell that its sculptor well those passions read
Which yet survive, stamped on these lifeless things,
The hand that mocked them and the heart that fed.
And on the pedestal these words appear:
`My name is Ozymandias, King of Kings: Look on my works, ye mighty, and despair!'
Nothing beside remains.
Round the decay
Of that colossal wreck, boundless and bare,
The lone and level sands stretch far away.

I later saw the original painting while on a job in Vienna, and have a framed poster from that exhibit on my bedroom wall.

Of course, the rest of the museum is amazing. Sanford Low's stewardship during the last mid-century, allowed the museum to acquire a collection which is second to none for a museum of its size.

I took my five year old twin sons with me, and they were as impressed by the Thomas Hartf Benton murals, and the wild plastic cup installation by Lisa Hoke, as they were by the kid's Art Laboratory.

We were also fortunate enough to catch the final day of Michael Theise's trompe l'oeil paintings in an exhibit called, The Eye Deceived.

We skipped through the exhibit of bejewelled handbags by Judith Leiber, but no museum ought to please everyone, all the time.
Posted by Ed McKeon at 8:39 PM