The army definition of "openness" 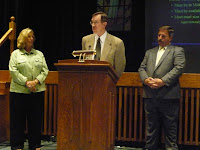 Several dozen of my neighbors and fellow residents and I, spent another few hours with the Army Corps of Engineers last night as the debate over an Army Reserve Training Center sputtered onward.

David Dale, deputy district engineer of the Louisville District of the Army Corps of Engineers, was assigned the duty of explaining the newest approach, and to take the heat from the crowd of opponents, who, overall, were polite, but earnest. Dale, joked at the beginning, that he was happy to be in New England, instead of in hot and humid Kentucky digging holes for his wife's landscaping projects. At the end of the meeting I asked him if, in the middle of the public comments, he might reconsider, and rather have been digging holes in Kentucky.

The Army presented search plans for a smaller site (25 acres), and declared an intent to keep the process "open" and to allow residents to be involved.

Unfortunately, at the first instance, Dale was forced to admit that the Army's idea of "open" was different than the public's view of that word. When asked if the Army would share its legal opinion about why the Training Center had to be built in Middletown, he answered, "no." Shortly thereafter, he was asked if the Army would abide by the decisions of Middletown's Wetlands and Watercourses Commission, he answered "no" again. So much for openness.

Some of my impressions from the meeting:

- Many residents have come around to the idea that no location in Middletown is suitable for the site.
- It's becoming clear that the public has a better grasp on the facts of the case than does the Corps, or City representatives
- The absence of a representative from Governor Rell's office was obvious, conspicuous and embarrassing, considering there were reps from the offices of Rosa Delauro, Chris Dodd and (CJ™) Lieberman, and state reps including Paul Doyle, Gail Hamm, Joe Serra, and Ray Kalinowski.
- The Middletown committee or seven, appointed by the mayor Sebastian Giuliano, includes representatives from Westfield (Stephen Devoto, Arline Rich), Common Council members Phil Pessina and Ron Klattenberg, city conservation commissioner Nancy Kiniry and South Farms residents Ralph Wilson and Phil Cox. Some of these people have been vocal at the meetings on the topic (Devoto, Rich, Pessina, Klattenberg), the others have been less conspicuous, and a few may not have attended any of the meetings. Will hours have to be spent getting these committee members up to speed?
- Where was the Hartford Courant? After several recent excellent articles by Jodie Modzder leading up to the meeting, the meeting itself was not covered.
- While the TV news coverage is appreciated, their methods are ridiculous. They show up, stay for 35 minutes of a two hour plus meeting, and then file a report based on partial knowledge. Since you asked, this is exactly what's wrong with TV news coverage - shallow, incomplete and inevitably misleading.
- And finally, Mile Lane. Last night it emerged, for me, as the most logical place for the Training Center to be build in Middletown, if it must be built in Middletown. It's currently owned by the Federal government. It's currently off the tax rolls. The Feds plan to remediate the site. The downside is that Middletown stands to be granted the site, for free from the Feds, and has $9 million committed from the state to build a fire station and training center on the site. To choose another location for the fire station would mean the purchase of land, and perhaps, putting the $9 million in jeopardy. The question must be asked: if the site is perfect for the Army Reserve Training Center, would the state be willing to help fund a new site for the much-needed fire station?

A legal opinion consists of a detailed analysis of the law, consideration of precedents, and a discussion of ways in which the present situation is informed by or is different from those precedents. After all that, there is a judgment. A legal opinion does not consist of someone, be he an attorney or a general, simply saying what he thinks.

So many new sites to Discover, so little time!

Mile Lane is an impossible dream. Just give it up. The City has had the property earmarked for years as a complement to the New High School's fields. And they have brokered a nice deal with the state to provide funding for a new Fire House, too. Recently we have witnessed the exuberance the City can muster to support residents with whom it agrees and the cold snubs that are offered to residents and Conservation Commissions with whom they disagree.The Mile Lane site will be fought tooth and nail! Probably full of turtles...

Pratt and Whitney as a possible host adds a genuine "red herring" to the site search madness.It will have strong advocates. Is there a more secretive company than Pratt and Whitney? Has there been much coverage concerning the contaminated site? Prowling the web, it appears that there are continuing concerns about nuclear wastes. All the familiar frightening radioactive elements are mentioned and a few possibilities that were new to me, like beryllium, as well. Maybe the Middletown Eye can dig up some information?This clearly is a bona fide brownfield. However, every brownfield does not a great Army Base site make.

Many communities are eager to recapture their riverfront from previous industrial usees. Their goal is for the public good, for the enjoyment of future generations and for the assurance of clean water. In contrast, middletown has set a goal of "Light Indudtrial" development for is riverfront and has recommended such a site for the Army eons ago. Pratt and Whitney's contaminated industrial site should be monitored and cleaned. But if it CAN be mitigated, I do not think it would then become a good site for an Army Base. Like the neighboring Kleen Energy Power Plant, an Army Base does not Represent "Light Industry".

Got to go sniff out some new sites.
Jasper Cane

Letter of the Law
Middletown is entitled to this legal document IF it exists. However, since it is non-existent, Middletown is not entitled to it.There ought to be a law covering this circular logic. That bothersome little "UF" word just will not go away. Most recently it has been interpreted to mean that the facility will not be built at all IF Middletown does not find a suitable location. IF the Armywants to cut off its nose to spite its face., that is their prerogative. IF the Army only had a brain!
Jasper Cane

What exactly is the Site Discovery Committee of Seven supposed to be doing? Fighting among themselves over turf? Licking the Mayor's boots? Selecting the best bad site in Middletown? Praying for a miracle? Seems to a casual observer that the Rubber Stampers of the City's position on sites are well represented. These are mainly the same vocal, principle-challenged folks who eagerly embraced the Boardman Lane Resolution that contained the endorsement of the City's site on River Road. The non-vocal, having been heretofore non-vocal, add a spicy bit of mystery to the brew. Perhaps they know something that we do not. I hope they have been harboring a well-concealed hidden interest.