The coalition of the wishful thinking 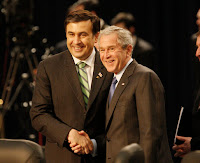 So, the Georgians sent troops to Iraq, and kept them there long after many members of the "coalition of the willing" withdrew. They took George Bush at his word, and like many journalists, politicians and citizens (of the U.S. and Iraq), they have come to regret it.

Like many of his "friends" Georgia has found out that Bush is as good as his word, and his word is worthless. Bush has encouraged the democratic and nationalistic tendencies of Georgian leaders, only to cave in the face of a ruthless and disastrous invasion by Mother Russia.

Read the comments following Djerejian's analysis as well -- NOTHING is as "simple" or "clear" as anyone would like it to be.