"Sorry" was easy, but it ain't good enough 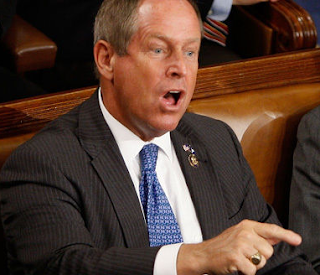 The boors are winning.

At the town hall meetings mob rule has prevented meaningful discussion and debate on health care.

And now, South Carolina's representative Joe Wilson decided to shout down President Barack Obama with a angry, "You lie."

So much for Southern gentility.

Where was Wilson when George Bush was standing in the same place and actually lying. Oh, that's right, George Bush isn't black.

Wilson has apologized to the President. And the President has wisely, graciously, if unsatisfyingly, accepted Wilson's apology, and wants to move on.

The problem is not Wilson's accusation. If we were to ask ever elected official in the room last night to stand and clap if they had ever offered a political lie to the public, we would have witnessed a standing ovation. Politicians lie. All politicians lie. (In fact, we all lie, Joe.)

And, for me, it's not about the loss of protocol. I, for one, would have been happy if one spineless Democrat had occasionally stood up to George Bush or Dick Cheney.

No, Wilson could have shouted, "you're ugly" or "you're a socialist" or "you were born in Kenya," and they all would have had the same effect. Guys like Wilson seem to think it's okay to shout at President Barack Obama because he's considered an impostor. To them, he's a black man in a white man's office. And a lot of folks don't give him the respect that they've given other men, in the same office, who deserved far less respect.

What Wilson did was send a signal to the racists, and the gun nuts, and the whack jobs, and the crack pots, and the birthers, and the deathers, that the man sitting in the President's chair is doing so illegitimately.

What Wilson did is give these creeps one more reason to believe that Barack Obama is somehow not their president.

"He must be a liar," they repeat. "Joe Wilson said so, and he's a Congressman."

Right here in Connecticut this morning, WTIC wingnut radio host Jim Vicevich, who hilariously called himself "the voice of moderation" today, played the Wilson accusation 6 or 7 times in the short time I was listening. And then he argued himself that the president was not being truthful, but was using "weasel words." And then he entertained at least three callers who called Barack Obama a liar, and each time he amplified the accusation by "proving" that the President was not being completely upfront about the proposed health care bill (Vicevich claims he has had some really "smart people" with "advanced degrees" who read and really understand the bill - a former Assistant U.S. Attorney General, Vicevich's sister, and the RadioVice blogmaster Steve McGough, who happens to work for health insurance giant UnitedHealthcare).

ASIDE: Just for the record, Vicevich hung up on two people who disagreed with him and, then, only after they were safely off the phone, he spent two or three minutes berating them. Bully=coward. The "voice of moderation" indeed.

The echo is deafening, and the crackpots are soaking it up. Listen to them repeat the chants "liar, socialist, nazi, racist (yes, can you believe? "racist")." Vicevich is leading the chorus of malcontents, and goes so far as to continue to remind them of their constitutional right to bear arms. I think any broadcaster with an ounce of sense and responsibility has to understand that lighting a match while standing in a puddle of gasoline, is not a good or gracious or democratic idea.

BTW, Jim, lay off the "young president" bit unless you really want to commit to the racist intent of calling him "boy."

Tonight, Jim Vicevich is the "guest of honor" at a fundraiser for Republican candidates for mayor and common council in my hometown of Middletown CT. I can only say, that any of those candidates who attend the fundraiser have lost my respect, and likely my vote.

As for Wilson, "sorry" is just not good enough.

And perhaps the only satisfaction is knowing that his Democratic opponent for the seat raised more than $300,000 for his campaign in the hours after Wilson's outburst.
Posted by Ed McKeon at 1:26 PM

Sad but true - Conservative commentators defend Wilson's right to speak up and speak out. Civility is disappearing before our very eyes, assassinated by those who have God on their side.

The ironic part about conservatives....Jesus was a long haired liberal hippy Jew, and I highly doubt he would like nor spend any time with those creeps.