Some damned good reasons to call the teabaggers, "racist." 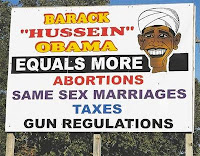 It shouldn't be a charge one cascades as a facile rejoinder to every wrong the lunkheaded rightwingers unleash.

But there's plenty of evidence, specific evidence, that racism is at the heart of a good many of the attacks on Barack Obama.

So when conservative shoutcasters, like our local watt-sucker, Jim Vicevich, express outrage at being called "racist," one merely has to point out how. Last week Vicevich was in the middle of a rant, during which he saw himself and his listeners ("my little mobsters" he calls them) as victims of a false charge of bigotry. In the same sentence he decried the charge, and implicated himself.

"Is it racist to challenge the policies of the 'young president," he screamed into the mic.

The "young president," is it? Once again, Jim Bob, you may as well call Obama, "boy."

He's black, and he's president. And he's a grown man. And for some people that just doesn't add up, does it, Jim?
Posted by Ed McKeon at 4:00 PM

we are not racist , the liberals are closet racists.

With the kind of drivel on your blog I am not surprised to read that you have been banished to the backwaters of radio for the past 22 years! Get a life.

Happy with my life Gordon. Sorry you're such a miserable asshole.