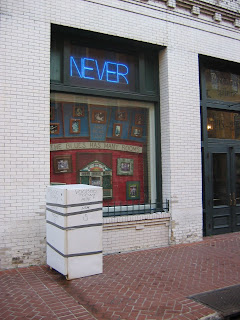 Four years ago this week I was sitting at a cottage in Narragansett, Rhode Island, where I was emceeing at the Rhythm and Roots Festival, and I was on the phone trying to figure out how to get a video crew into Alabama, Mississippi or Louisiana after Katrina had ripped apart the Gulf coast. I was on assignment for a local insurance company which wanted to document their handling of claims during the crisis.

I managed to get an advanced team into Mississippi a few days after Katrina. A week later I was in New Orleans the day it was first opened to insurance adjusters, contractors and some business owners.

We landed in Alabama, and drove to Louisiana. The towering commercial signs advertising fast food and gasoline were all absent their messages, and treetops along the highway were shorn. We gassed up in Mandeville, unsure that we'd find fuel in New Orleans, and filled the back seat with water, candy bars, jerky and peanut butter.

That first trip over the Lake Pontchartrain causeway was eerie, and the damage to the city was apparent immediately. I had contracted with a crew from the city to take me around. The camera operator had already spent days with network producers scouring New Orleans when it was still flooded. With his NBC credentials, he got me into Lakeview and the Ninth Ward to see the extent of the hurricane damage. 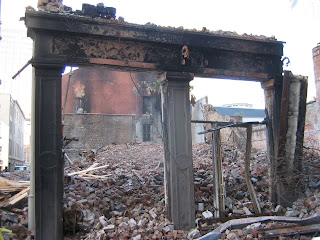 That night, we stayed in a chain hotel on St. Peters with TV crews, security personnel, National Guard members and Fats Domino. We grilled hot dogs on the sidewalk, because the hotel restaurant was not open for business, and traded the frankfurters for National Guard MRE's (ready-to-eat meals). 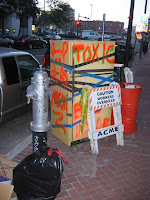 I love New Orleans, but was only able to walk after the sun rose, and before it set. The city was closed otherwise, and since I worked all day, these morning and evening walks allowed me to see a major American city empty, and on the skids.

A major memory, beyond the damage, were the refrigerators, duct-taped shut, lining the sidewalks and stinking to high heavens. Many marked with a mysterious graffiti message "Voodoo Today Here Now 5." I don't know if anyone has ever figured that one out.

While New Orleans has made significant strides back, it's still not, and may never be, the city it was. A lot of the anniversary reports dwell on the work still remaining to be done. 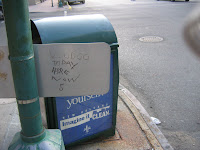 But native New Orleanians have not given up on the city, and after four years, that's the best one can say about this one-of-a-kind, exotic non-american, American city.
Posted by Ed McKeon at 4:36 PM