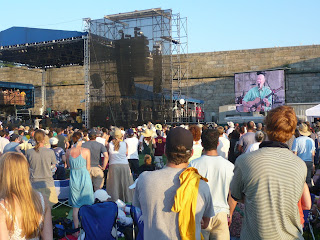 Saturday at Newport was a wonderful day. The most wonderful thing for me was the number of young people at the festival.

Whoever was responsible should be lauded for creating a lineup that appealed to a very broad demographic. 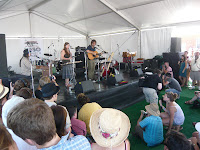 With veterans like Ramblin Jack Elliott, Mavis Staples and Pete Seeger (not to mention festival hosts Bob Jones and Jim Rooney), holding down the legacy spots, and Billy Bragg and Gillian Welch representing my generation, the lineup was filled with young, talented musicians pushing out the boundaries of "folk" music. 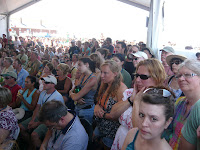 There were 9200 in attendance, and that doesn't surprise me, because it was one of the nicest days of the summer, and one of the best festival line-ups I've seen in years. The side tents, which usually feature a number of empty seats, were brimming with people, who spilled into the aisles, and out the back and sides for performances by Brett Dennen, Langhorne Slim, the Low Anthem and Blood and Wine (more on that in a future post). 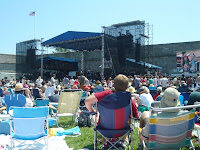 On the main stage The Avett Brothers portrayed a punk attitude embracing a traditional heart, the Fleet Foxes flew the freak flag and the Decemberists' Colin Melloy demonstrated that at the heart of his theatrical pop songs lay a tribute to folk traditions.
Posted by Ed McKeon at 10:08 AM