How to skin an eel 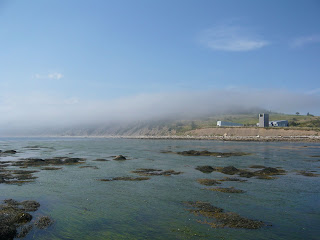 It's difficult to believe that our week at Shobac is nearly over.

The rugged beauty of this spit of land which pokes out into the Atlantic is breathtaking, particularly the way in which the view changes with the tide, and the angle of the sun, and the shift of the wind which will envelope us with a fog bank one moment, and sweep it over the drumlin hills the next.

This morning, the owner of Shobac, Brian MacKay-Lyons, sat with his wife in a circle of Adirondack chairs talking to Myles, the local lumber operator who is clearing a field so that it can be planted with grass for the cows which graze the hillside. MacKay-Lyons is an internationally-acclaimed architect, but you wouldn't know it by his friendly humility. He sat with Myles, a native of the area who is part Micmac Indian, sipping coffee and grape juice. And for this meeting, MacKay-Lyons was dressed in green bathrobe and baseball cap. We talked about the beauty of the land, and he laughed at my description of the hills as "mountains." I told him that in Connecticut, these were considered to be mountains. He told me about his childhood days when, on the way to school, he put out a fishing line attached to a stake so that he'd have fish for supper after school.

Myles told us about fishing for eels when the tide pushed the eels upstream where they swam below the gravel in the stream bed, trapped by reeds Myles would push into the bed. He and his friends wore gloves when eel fishing, "because they are so slimy, you can't get a hold of them."

I told him that's why they didn't seem so appetizing for that very reason.

"I love them," he confessed. "To skin them, we'd stick a nail on a wall, hook the head of the eel, and make a slice around his neck, then just pull the skin down, like a snake."

While it didn't make the thought of eating eel any more appetizing, the image will remain indelible.
Posted by Ed McKeon at 10:11 AM

You should try the Grilled Eel at a Japanese restaurant sometime. One of my very favorite meals is the eel along with a plate of Gyoza (fried dumplings) and a huge bowl of ramen soup, all washed down with ice cold Asahi beer. Yum!

Smoked eel (often on a stick) is a favorite in Holland...and it's excellent. Grilling is okay, too, but leaves them a bit oily.

Coventry Lake has a good supply of eel. I know a hot-spot there; fish for them at sunset or at night.

Slimy as hell, but worth the work.

Wow! Slimy Eel and Creepy Joe all blogged about on the same day!! Coincidence??