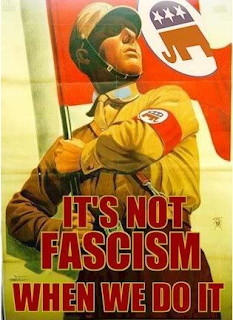 I've been troubled this week by the denouncements by liberal commentators and the Democratic party of the troublemakers who have shown up at town meetings to disrupt the work of politicians pushing a national health plan.

The First Amendment guarantees free speech, and so it bothers me when any progressive makes the argument that free speech is okay for me when I want to denounce George Bush, but it's not okay for my fellow American who wants to denounce Barack Obama and the Democrats.

The First Amendment does not legislate decorum or politeness. It consecrates free speech, and sometimes free speech has to be shouted. And sometimes it's shouted by people we don't like, and don't agree with.

That means we might not always like what we hear, whether its an obscene word, a homophobic slur, a blasphemy or a racist remark. The First Amendment doesn't guarantee that we won't hear from assholes. We will hear free speech from assholes, and we must tolerate the speech.

But we don't have to stand by idly and tolerate the ideas. That's what free speech is about too. Standing up against racists, homophobes, idealogues, hatemongers, anti-intellectuals, demagogues and bullies of any stripe. They shout. We shout louder.

(A slight digression. One of the first Supreme Court cases newly-sworn-in Judge Sotomayor will hear is a free speech case. In this case, Citizens United vs. FEC, was a narrow argument, that has broadened and will be argued before the SCOTUS as an argument to allow corporations to provide unfettered donations to political candidates as an act of free speech. Here's what one conservative commentator argues, in, ahem, Capitalist Magazine, where they seem to conflate free speech with free market. The DNC has filed a briefing against corporate interests - and union interests, interestingly enough, and Sotomayor, an elections reform proponent, is expected to side with the FEC. But treating a corporation as an "individual" with the rights of the individual, and assigning free speech rights to campaign dollars is far more ridiculous than defending a lap dance as free speech. And I can assure you that there are thousands of conservative Republicans who would fight for lap dances - though probably not publicly.)

The Democrats, and the Obama administration have to own up to a bit of this mess. The health care plan they offer is so watered-down by compromises to corporate interests, and so complex, that it is nearly impossible to sell to anyone as a good thing. And Democratic legislators are doing a horrible job of selling the weak-kneed plan. The strategy is to pass something-anything as a national health plan as a first step to get something on the books and to demonstrate Obama's effectiveness. I say, President Obama, step backwards and remember your campaign of hope and progress and give us a brave and effective plan, and not this mess.

So, Obama and the Democrats gifted something to the conservative commentators to latch onto. A thousand-page plan with give-backs to pharmaceuticals, insurance companies, hospitals and established health-care providers, while stripping it of a public option, and a universal payer. And hanging on it a scary, and probably inevitable, price tag.

Now, a good, simple, universal plan could be sold on its advantages. This Rube Goldberg bill has to be sold, really sold, as if it were a Hummer with spinning rims, gold-plated bumpers and a hybrid gasoline-gin engine.

And so we have the Glenn Becks, the Rush Limbaughs and locally the Jim Vicevich's denouncing the plan and urging the blockheads who listen to them to attend meetings and scream. These teabaggers, most of whom don't have an independent thought in their heads, follow the scripts of guys trying to make ratings, and lobbyists who are working against the plan. Ladle on top of that Republican political leaders who are searching for support and a new base, and you get meetings where ineffectual Democratic leaders are drowned out by the shrill talking points of talk-radio and C Street zealots coming out of the mouths of conspiracy theorists, flat-earthers, birthers and racists.

And we can dismiss them all as "wing-nuts," but I'm afraid my suspicion that something darker is happening has just been confirmed by Sara Robinon's insightful analysis of Robert Paxton's essay, The Five Stages of Fascism. Both Paxton's original essay, and Robinson's update are essential reading.

Robinson's thesis is this: we are at the point where a disenfranchised conservative movement is grasping at the last straws of racism, purity and patriotism, to engage a core base, who in their fear is willing to rise up to destroy what they see as threats to their country, their religion, their morality and their way of life. Intellectually, of course, these screaming idiots are easy to dismiss, but what's impossible to dismiss is the fact that a movement is afoot, and its being abetted by the demagoguery of ratings-hungry broadcasters, desperate politicians, and corporations willing to do anything to preserve their bottom line. And it is, Paxton's third stage of the rise of the tide of fascism, a tide he sees as nearly impossible to turn back.

So, it's time to stand up and call out the birthers and the racists, and the liars and the homophobes and the sanctimonious and the charlatans and the broadcasters and politicians who would destroy democracy to consolidate money and power. It's no time to be timid.

Just a couple of thoughts, healthcare reform without tort reform is not reform or reducing costs. To disallow companies unlimited political contributions but allow them to unions should not be allowed.