A willful disregard for the facts 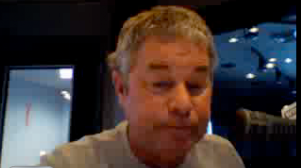 Yesterday I allowed myself a listen to the carwreck which WTIC-AM has become.

Jim Vicevich was at the top of his form, playing the same soundbites ten or fifteen times per show, to somehow emphasize his misunderstanding of them, and occasionally playing one of the many bites he repeats over and over and over and over through the year, as if the repetition in someway bestows credence. When he wasn't beating the soundbites to death, he was mouthing empty platitudes from the conservative script - socialism, nanny state, enhanced interrogation, generational theft, blah, blah, blah.

If anything, old Vicegrip has become more shrill as the months of the Obama administration tick by. It was to be expected. For all the carping these conservative did about Obama, it was a boon to their ratings. Now they're the victims, and liberals are the persecutors. (Ironically, Vicevich, who demanded respect for the commander-in-chief, when Bush was in office, can't seem to muster the requisite respect for Obama).

But Vicevich got up a head of steam on a story that appeared in the Boston Globe about a Harvard program which helps lower income students adjust to life at a school where wealth, and all its perquisites, are considered commonplace. The program seeks to bridge the cultural, social and economic gap which becomes evident, and intimidating, in the most common ways - like being able to afford a winter coat.

Vicevich reinterpreted the facts of the stories, and created a distortion which made a mockery of the facts relayed in the story.

He told his listeners that the Harvard program provided money so poor students could go to the prom, though the story never mentions the word "prom" and Harvard would doubtlessly find it hilarious that Vicevich thinks they hold proms there. In fact, the story says that funds are availableto pay for such things as "admission to dorm dances, tutoring, winter coats, even plane tickets home."

It can be difficult to discern the neediest students. There's no support group or club for them - many students prefer not to reveal their socioeconomic standing. The university keeps a list of them, available only to Harvard financial aid officials, to try to meet their needs throughout their undergraduate years, be it emergency money for a root canal or a loan for test-prep courses, an interview suit, or travel while studying abroad.

One might guess that a self-professed Christian like Jim would appreciate the concept of assisting a needy student through some difficult, and embarassing times.

But, no. Vicevich wailed about the way in which Harvard was preparing the student (actually two students are featured in the story, and Vicevich continued to conflate the facts of the two students' situations) for the "nanny state."

Has anyone ever asked Vicevich if it was the "nanny state" that helped him avoid creditors in his own bankruptcy?

He bellowed about "the state" paying for tuxedoes. Not sure what "state" Harvard is, but it's probably better off financially than most of the other 50.

But the worst manipulation of the fact is that Vicevich said again and again, that Miguel Garcia was complaining about his situation (Vicevich offered a histrionic imitation of Garcia, wailing like a baby with a dirty diaper). Vicevich claimed that Garcia was getting $50,000 a year in scholarship, and that should be enough, so Garcia should button up.

The story makes clear that Garcia felt intimidated and disconnected, but Garcia himself acknowledges the subleties of getting a paid-in-full first-class education, and needing to worry about his parent's car payments. The story also indicates that Garcia had found coping mechinisms, and that complaining was not one of them.

While it's puzzling that Vicevich could find so much powder for his indoor fireworks, all you need to do is read the comments following the Boston Globe story to see the kind of company the talk show host keeps.

The dark and thorny vines of envy, ignorance, prejudice, racism and anti-intellectualism wind their way through the comments on the radio, and in the newspaper.

Vicevich is a shameful liar who is using his three hours of vitriol to stoke the fires of hatred. He has, and will claim it isn't so. But a man who is smart enough to know what generates ratings, is not stupid enough to believe what comes out of his own mouth.

BTW, in his online commentary, which appeared after his on-air rant, Vicevich tries to ameliorate some of the false on-air claims he made about Garcia. Vicevich "writes" in a sentence that goes on forever attempting to find a point:

Because Miguel worked his way into Harvard on his own merritt and not on the back of a “rich alumni Daddy” or because he came from some famous family … the odds are all of those folks that make him uncomfortable, will be working FOR Miguel some day, because Miguel is the premiere example of personal freedom, and individual achievement, a life to be celebrated and not pitied. But then, that’s just my take.

And I guess working "his way on his own merritt," means he took the parkway through Connecticut on his way to school.
Posted by Ed McKeon at 2:07 PM

wasn't/isn't he the same guy who tried to make it in television years ago on Channel 3? he wasn't any good then and i guess time doesn't necessarily change everything or everyone.

Where did that weird looking photo come from? It looks like the WTIC air studio. Does this blithering idiot have a webcam running while he's on the air? I wouldn't know. I stopped listening, and forgot this station even existed, when they made up all those lies about why they fired their token on-air liberals.

This is a disgraceful article. All people like you do is spend all day in their mom's basement and try to discredit those who actually do good in this world. You are a disgrace.

FYI, Vicevich is very ill and the picture you posted here doesn't even look like him. As you distort his views and his message, you choose to use a picture of him that is not at all representative. Just another indication of the baseness of your character.

I tune in to Buddy now and then to get a sampling of his alternate universe. He strives to be a little league Limbaugh and, like pilonidal Rush, is immensely pleased with his presumed cleverness. WTIC-AM is an embarrassment.