The brothers Reid at the Iron Horse 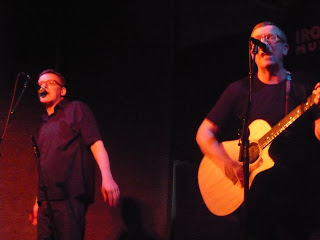 At 47, twin brothers Craig and Charlie Reid, aka The Proclaimers, show little loss of energy or voice after a career in which their high-powered, intertwining vocals and thick Scottish burrs have delighted fans.

Thursday night they played the Iron Horse in Northampton Mass for the second time. Their last show was way back in 1997.

Thursday the Reids played all the "hits" (only one of which was truly a hit on these shores). They began with my favorite, "Letter From America," and ended with everybody's favorite, "I'm Gonna Be (500 Miles)." In between they sang the two upcoming singles from their forthcoming album. They sang "I'm On My Way," which found new life in the Shrek soundtrack, and they performed such gems as "Sunshine on Leith" and "Cap in Hand."

As a solo act, the duo don't have a broad dynamic range. What makes them great, and inevitably interesting, is the intensity and power of every song. But with only a strummed acoustic, the vocal onslaught leaves one wishing for some relief.

We sat at the table with Juliana, from San Jose, who may be the biggest Proclaimers fan. Just 23, she's seen dozens of Proclaimer shows, and intends to cover several on this seven date swing.
Posted by Ed McKeon at 5:52 AM