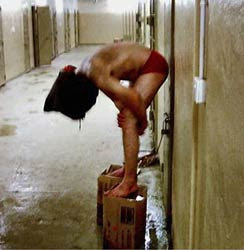 Both Glenn Greenwald and Dan Froomkin have taken the Obama administration to task for Obama's sudden reversal about releasing further photos taken at Abu Ghraib.

Froomkin, in a Washinton Post editorial lambasts Obama and pulls apart each and every excuse the administration concocted to explain their reversal.

Greenwald admits to puzzlement over a public which seems to agree that our government should not release evidence of its own wrongdoings. It's what the Bush administration did, again and again. To see the Obama administration walk this path is frustrating, angering and impossible to understand.

It's pretty clear. Either we tortured, or we didn't. And the answer to that question, inevitably seems to be, "we tortured."

And if we tortured, then we broke laws, we allowed immoral, unethical behavior in our names, and the people who put us in this postion need to be revealed, at all levels, and brought to justice so it never happens again.

As a torturing country we are in the company of Stalin's Russia, Pinochet's Chile, Idi Amin's Uganda, Saddam Hussein's Iran, Marcos Phillipines.

While it drains the life from any moral imperative we thought we had, new evidence shows that on a practical level, it may increase the use of terrorism on these shores.

Each and every one of us needs to stare hard at what our leaders ordered the men and women of the military to do. Then, only after we've seen every photograph, should we decide whether men like Dick Cheney, John Yoo, Donald Rumsfeld and George Bush belong in a cell.
Posted by Ed McKeon at 2:33 PM

"And the answer to that question, inevitably seems to be, "we tortured."

"....Each and every one of us needs to stare hard at what our leaders ordered the men and women of the military to do. Then, only after we've seen every photograph..."

But does it really matter? We know what's been done, we've seen pictures, we've watched HBO's "Ghosts of Abu Graibh" (and if we haven't, it's available), and we know who's at fault. Do even more pictures tell us any more? WE HAVE TORTURED. It's a given. Now let's do something about it.

If people who are calling out for more photos ever really saw the worst of the worst various acts played out in war time...well, after they've finished reacting (i.e. puking, wailing, etc) they might take arms themselves and go after whomever they think enabled or broke the minds of those who committed the various truly heinous acts. I've seen no photos in the media that come close to what I've seen. I would rather experience what I've seen in those AG torture photos, than other nonspeakable acts carried out in wartime. Stephen King couldn't even dream-up some of those horrors. I guess I'm not sure people really want to see what their loved ones have done in the jungles, etc.