And just what are they smokin' up there?

So, now we will continue to waste $11 million in enforcement each year for arrests for possession of less than an ounce of a mind-altering substance which wreaks less havoc on society than the legally sanctioned substances like alcohol and tobacco. 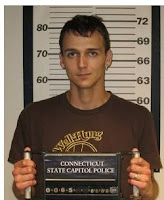 Pro-marijuana forces could learn a lesson about public relations. A threatening email from the VP of the CT chapter of NORML (now disbanded), did the cause considerable harm. What can one expect from an individual who wears a t-shirt that reads: Well hung.
Posted by Ed McKeon at 4:14 PM

What you can expect from that individual sir is for him to go to some godforsaken place and risk his life and limb to for your liberty. He was in the military and should not be sandbaged because he hit the wrong button on the computer. But then again I'm sure you never ranted to a friend about a politician your were not pleased with.

I don't recall ever writing to anyone that I was going to put a boot in their face, if that's what you mean. Being in the Armed Services is no excuse for bad behavior.

I don't know Ed, depending upon a person's mental health before they entered the armed services, the military might be a factor in ones unusual behaviour once they're free to roam. Men and women much more stable than this character have been broken by the military.

But sorry, Dan. You might think about the thousands who have also been shipped to a "godforsaken place [to] risk life and limb for your liberty" who are doing just fine.

By the way, this dude is Dominic Vita of Somers, CT (just in case the Lieberman camp is reading this and looking for recruits.)

Too bad for NORML, and supporters of this recent bill, that they didn't look into this whack job's past & present. Hopefully NORML will do a better job of enlisting credible, intelligent people to represent their state chapters.