The images of war 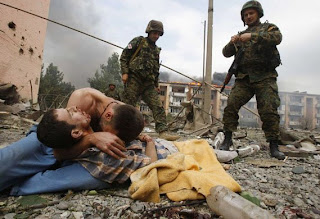 I caught my four year old son staring at the image on the front page of Sunday's New York Times. It was a photo of a man embracing the corpse of a relative who had been slain in the bombing of Gori, Georgia by Russia. The dead man wears vintage Adidas, khakis and a plaid shirt he could've bought at Target. Standing above the man are two soldiers. I asked my son what he saw, and he was jolted back to our comfortable living room, and he said "Nothing." I knew he saw what I saw in the photo, horrible suffering - suffering he couldn't understand. I tried, inadequately, to describe what had happened, only to have him ask me who the "bad" people were, and to ask me to reassure him that they were far away, and that this same scenario could not happen to us.

Earlier in the day, I caught myself staring at the same photograph, with tears in my eyes. The horror of the Russian-Georgian conflict is evident in dozens of photographs already published around the world. The horror of the war is magnified by the fact that these people, these bodies, look alot like many of us. The skin color, the clothing, the facial features - these could be your neighbor, your cousin, your brother. They are.

It caught me off guard. Would I feel any less horror if these victims had black skin and were dressed in tribal African garb, or if they wore headscarfs and robes over their brown skin? I'd like to think my horror would be as significant. I've found myself staring at the same kinds of photos from Darfur, and Indonesia, and feeling the same sickening hopelessness about mankind.

But I've rarely found myself staring at photos of this kind of horror from Iraq and Afghanistan. Perhaps, if at the outset of the American incursions into both of these countries, hundreds of photos of dead civilians had been printed in the American press, our immediate feelings about the war would have been different. Perhaps if we witnessed the daily suffering of people trying to live "normal" lives, but interrupted by the horrors of war, we, as a nation, would have done more to stop the Bush administration from exercising his destructive machismo.

The Pentagon, and the press have failed the American people by refusing to allow us to see the results of our destructive ways. Those images can be hunted down on the internet, but rarely, in the past eight years have we seen the bloody face of a dead father and never have we seen the torn body of an American service person, unless it was in the cause of raising the ire of the American populace.

Some say the Viet Nam war was finally driven to a stop because television and news photos showed us its horror.

It's a mistake to fight an visually antiseptic war. It's too easy to hide in our cocoons and hum "God Bless America."
Posted by Ed McKeon at 5:39 AM