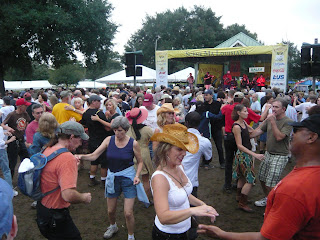 I'm just back from being out of town for a few days doing some film production in Mobile, Alabama and Natchez, Mississippi. I found Mobile less charming than expected, and on the contrary, despite the ghosts of slavery which loom over Natchez, it's a beautiful little town on a broad stretch of the Mississippi River crammed full of interesting architecture, most of which are stately antebellum structures.

I took the opportunity for a side trip of a couple of days to a place that inexplicably feels like a second home to me, Louisiana.

Never fully jettisoning its status as a French territory (and Spanish before that), it's the only place in the world where the Napoleonic code is still the basis for law. It's also one of the most exotic places in the United States.

It's a bundle of contradictions. Deeply embedded racism, and some of the deepest racial harmony I've ever witnessed. Flag-waving patriotism living elbow-to-elbow with a proud French culture which fairly spits the word "americaine" as the curse which rained down highways and McDonalds and nearly ravaged a culture where neighborliness and home cooked food are almost a religion. Broad fertile prairies bump up against dank foreboding swamplands. Nature perseveres with a vengeance on wide acres where oil derricks pump endlessly into the night.

New Orleans is a part of this, but that's another story altogether.

I wanted to visit several of my friends who live in the Acadian - Cajun- and Creole corridor that runs from Henderson Swamp to Eunice and beyond.

I stay in Breaux Bridge, an old farming town bisected by the Bayou Teche. There are half a dozen lovely bed and breakfast accommodations in a town which is now a magnet for artists, musicians and antique merchants. 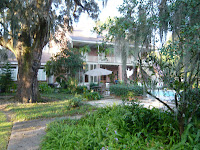 On my first night in, I stopped at Nunu's in Arnaudville where fiddler David Greely assembled a congress of fellow fiddlers, many of them young, who played ancient music filtered through young fingers. Nunu's is a cafe/concert hall/arts space/educational facility which attempts to present a few concerts each month featuring the traditional music of the area, rooted undeniably in the predominant French culture of the Acadians (from Britanny and other parts of France, via Nova Scotia), and the Creoles who are influenced by African, Caribbean and Spanish roots. 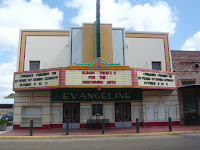 After a restful night, despite a wicked head cold, at the lovely Isabelle Inn, I headed to New Iberia to walk the streets made famous by detective novelist James Lee Burke and his rogue detective Dave Robichaux. New Iberia was abuzz with preparation for a gumbo cook-off which would feature music, local food, and of course, a gumbo-cooking contest. I didn't make it back to sample the gumbo, but I had my share at other stops on the trip.

A quick stop in Lafayette to hear a bit of music by zydeco artist Corey Ledet, and young Cajun band Feufollet to kick off the weekend Festivale Acadien in Lafayette, then it was back to Breaux Bridge for lunch with Susan and Carl, both of who are from Louisiana, but who have called Connecticut home, and now have adopted Breaux Bridge. We ate at Cafe des Amis (I had catfish and machoux). They introduced me to the owner of the Cafe, Dickie Breaux, who among other things, spent his life in Louisiana politics and kept me fascinated with tales of institutionalized corruption, and the difficulties of being a very liberal Democrat in a deeply conservative Southern state.

That evening I made my way to the Blue Moon Saloon and guesthouse where Cedric Watson and his band Bijou Creole were to play. I sat next to Ken Doucet who complete my day with more tales of Louisiana politics, the role of the Mafia in the state, and sordid tales of cousins, and uncles and women. By his telling, his uncle contributed to the death of Huey Long after he was shot in the state Capitol building in Baton Rouge. Ken's uncle was a trusted general practiti 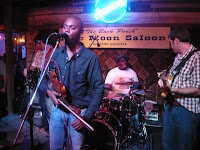 oner to Long, and Long insisted that he perform surgery to remove the bullets from his gut. The uncle was not a practiced surgeon, and, well, the Huey Long shooting is now called an assassination.

Cedric Watson filled the dance floor with a sweaty, enthusiastic crowd, and though I swore to leave in time to hear Steve Riley and the Mamou Playboys play a rare gig at La Poussiere in Breaux Bridge, I couldn't tear myself away, and spent the rest of the evening at the Blue Moon. 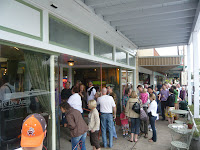 The next morning I rose early to get a good spot for the Zydeco breakfast at Cafe des Amis. When I got to the cafe on Bridge Street at 7:20, there was already a line of thirty ahead of me. When the doors opened, I found a place at the bar and ordered a coffee, while many in the tiny restaurant pulled on strong Bloody Mary's as they downed cheese grits and boudin balls. The crowd filtered in as Corey Ledet and his band arrived and set up, and by 8:30 AM on a Saturday morning the dance floor was filled with bobbing bodies swinging to Ledet's throbbing Zydeco beat. As I left, the line to get in ran halfway down the block. 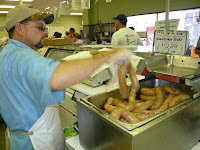 I made an early retreat to visit Marc Savoy's Music Store in Eunice, northwest of Lafayette, where a regular Saturday morning jam session draws wizened veterans grasping delicate fiddles in muscular paws, mixed with up-and-comers hoping to steal a lick from the oldtimers. I stopped on the way to pick up a typical Saturday morning visiting treat on the prairie - hot boudin and crackers - at Ray's Boudin and Cracklins shop in Opelousas. I bought a small bag of cracklins for the short drive to Eunice. Cracklins are knows as a perfect food. Pig fat cooked to a hardy crispness in, pig fat, and then seasoned with salt and a variety of peppers. Boudin is pork and rice sausage which is cooked twice. The mix is cooked before being stuffed in sausage casings, then cooked again in broth or in oil.

As Marc Savoy said as he pulled took a bite of the spicy sausage, "Yum." 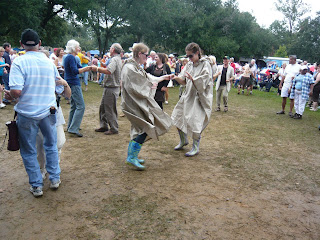 I caught up with Marc and Ann Savoy, and then headed back down to Lafayette for the already-underway Festivale Acadien. One of the most popular regional music festivals, Festival Acadien is completely free, and features music of the local French culture, very reasonably-priced delicacies from a variety of the local restaurants, and crafts from around the region.

A night of rain left Girard Park, located adjacent to the University of Louisiana, a soup of mud puddles and slick bogs. The locals wore colorful rubber boots that did not impair dancing a wit. And on whatever of the four stages featured music, there was dancing. In fact, at one point I walked past four different acts, on four different stages and the dance floor (the muddy patch in front of the stage) was filled at each one. 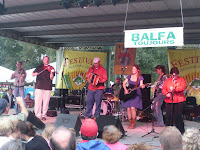 I scouted the food booths before deciding what to try. It was a difficult decision considering the choices, jambalya, gumbo, etouffe (spelled, frequently "A-2-fay"), fricasse, pistollettes, boudin, po boys, tasso, catfish in many incarnations, crab, crawfish, shrimp, red beans & rice, and a variety of mouth-watering pastries, bread puddings and cobblers.

Throughout the day I had some jambalaya, boudin, catfish, etouffe and some crawfish enchiladas. My eyes longed for more, but alas. 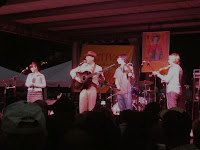 As for the music, it would be difficult to say what I enjoyed most - Jesse Lege (who lives part time in Connecticut and makes his living as a carpenter here) transformed at home by an all-star band with members of several local combo providing him the kind of backup he could never find in the Nutmeg State, Balfa Toujours (who recently peformed in Middletown) calling the amazing Horace Trahan in to substitute on accordion for the absent Dirk Powell, the Pine Leaf Boys roaring across the stage as the light faded from the sky, or Feufollet bringing the legendary Zachary Richard onstage to sing the classic "J'ete Au Bal."

As the last notes filtered through the branches of the live oaks in Girard Park, I had to decide whether to spend another evening at the Blue Moon Saloon with the Pine Leaf Boys, or make the prudent escape to my B&B for a very early morning trip to the airport. I chose the prudent Yankee route. 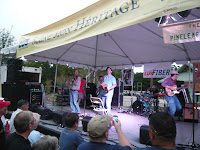 Had I know my flight was going to be canceled, and that I would sit for four hours in the Lafayette Airport, I might have made the decision to swallow a few more Abitas and sway a few more hours with my Acadian friends.

The respite in the airport allowed me to write this, and to reflect on a culture which many thought would disappear in Louisiana. But despite attempts to drive the French Culture out, the resulting counter-attack to preserve it, has created a culture that is as diverse as it is united, and as spectacular as it is homespun.

Any culture that can weave eating, playing music, taking a sip, telling stories and hanging out with neighbors, is likely to survive as long as we love doing all those things.
Posted by Ed McKeon at 11:11 AM