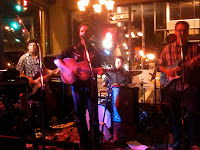 I've been meaning to make it down to Tapas on Ann St. in Hartford for months to catch the Monday night stand with the Shinolas, an erstwhile band consisting of great session players.

Every Monday they gather in the Asylum Street window of the modest eatery and turn it into the kind of joint you only find in Nashville or Austin. Great players having a great time singing and playing originals and covers, mostly of the rootsy rock, rockin' country or pumped-up traditional variety.

Last night they were joined onstage by acclaimed Boston singer-songwriter Mark Erelli, who enjoyed a sabbatical from being the "folksinger" so that he could trade leads on rockers with Chapdelaine, and so he could share band versions of some of his great tunes including "Compass and Companion," and his tragic take on the Hartford circus fire he calls "Hartfordtown." In between the band moved easily between Jimmie Rodgers, Johnny Cash, Merle Haggard and Warren Zevon. During two extended jams, it was difficult to tell who was having more fun - the band or the audience.

This regular gig has turned an off night for the Hartford eatery into a a busy night that has become an important staple of their week's income. On Monday the restaurant was fully booked out, with standing room only for latecomers.

The Shinolas have made it a practice to invite friends onto their stage. Besides Erelli, they've hosted Al Anderson, John Pousette-Dart and Daisy Mayhem fiddler Rani Arbo. Chapdelaine hinted of a few surprise guests to come.

While the wind whistled through the rest of Hartford's empty streets Monday, the joyful noise was warm and welcome inside Tapas.

I just wish people would SHUT UP while the music's being made. It was clear last night that some attendees were there just to be part of The Scene rather than to enjoy some fabulous music.